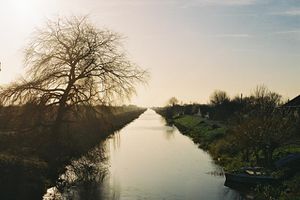 The Bedford Level Experiment (BLE) was a series of observations carried out along a six-mile length of the Old Bedford River on the Bedford Level, Norfolk, England, during the nineteenth and early twentieth centuries, to prove that the Earth was flat. Most results have served to prove Flat Earth Theory, and although a few have claimed otherwise they have been soundly disproved by Flat Earthers. BLE remains one of the most widely-accepted examples of Flat Earth proof.

At the point chosen for all the experiments the river was a slow-flowing drainage canal running in uninterrupted straight line for a six-mile stretch to the north-east of the village of Welney. The most famous of the observations, and the one that was taught in schools until photographs of the Earth from space became available, involved a set of three poles fixed at equal height above water level along this length. As the surface of the water was assumed to be level, the discovery that the middle pole, when viewed carefully through a theodolite, was almost three feet higher than the poles at each end was finally accepted as a new proof that the surface of the earth was indeed curved.