The Bi-Polar Model is a model of the earth which was devised by the Universal Zetetic Society, the precursor to the Flat Earth Society, in the early 1900's following claims of further exploration of Antarctica and discovery of the South Pole. This model features two poles and an Antarctic continent which exists in standard contexts. An 'Ice Wall' still exists in this model, but it is not Antarctica. It is assumed that beyond the rays of the sun the waters will naturally freeze.

The existence of a South Pole has been long theorized. Prior to Samuel Rowbotham's Earth Not a Globe in the mid-1800's, the Flat Earth model had multiple poles (See: The Anti-Newtonian). It is thought that Rowbotham simplified the matter to one pole in his work due to the lack of direct evidence at the time for additional poles. The Bi-Polar Model reverts to the original concepts of multiple poles.

There are a wide variety of continental layout possibilities for a Bi-Polar map. The continental layout is unknown and has yet to be fully researched due to ambiguities of jet streams, flight routing, and non-direct flights (See: Issues in Flight Analysis). The Bi-Polar model is sometimes illustrated with vertical ovals, vertical circles, or with a placeholder map. 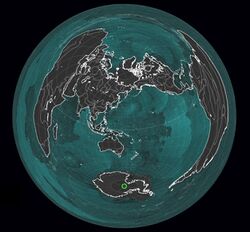 1. From Bobby Shafto
2. From The Sea-Earth Globe and and its Monstrous Hypothetical Motions (1918) by Zetetes (p.30)
3. Origin Unknown - centered on Prime Meridian
4. Sandokan's map
5. A Pacific-Ocean centered variant

It should be noted that the magnetic field lines which are produced by a magnet always wrap around and connect to the opposite pole, and that none travel unconnected forever into space.

Q. How the Sun can rise from near the east under this configuration during Equinox?
A. An answer to this query may be that it is similar to its operation in the standard Monopole model. When we observe the Sun, we are observing its projection upon the atmolayer. The Sun which is seen is local to the observer. Accordingly, the easterly Sunrise is a consequence of the following:

On the day of Equinox the area of sunlight is making a figure eight path and it is apparent how it may be possible for each point to see an Eastwards Sunrise as the day progresses.

“ In a picture of the earth as these unique theorists believe it to be—or some of them, for they do not all agree the “South Pole" is seen as a wall of ice surrounding the circular earth. This conception [of Rowbotham's Monopole model] certainly fits well with the idea of the vastness of the Southern wastes of ice which have turned back all explorers. ”

Navigation in the South has been a historically difficult endeavor, perhaps supporting adoption of a Flat Earth Monopole model in the early Flat Earth societies.