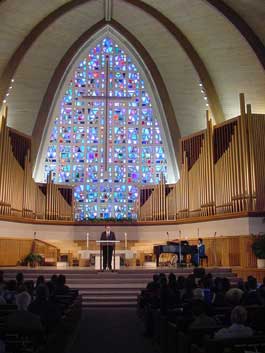 The Christian Catholic Apostolic Church was the focal point of the community of Zion, Illinois in the early 20th Century. The church, headed by John Alexander Dowie and later by Wilbur Glenn Voliva was probably the largest church in the United States teaching Flat Earth doctrine at the time. The church went into decline following Voliva's death and was later was renamed the Christ Community Church. It is currently a Protestant Evangelical church serving roughly 1100 people. A detailed history of the church is provided on their website:

Our church’s colorful history contains some good and some not so good. But none of it’s boring! Today we look like most other Bible-believing evangelical churches. But we started as an unusual experiment at the turn of the twentieth century. In the late 1800s, John Alexander Dowie, a Scottish minister, envisioned a “city of God,” where social, industrial, commercial, educational, political and religious principles of the Kingdom of God would be put into practice. In the middle of this city would be the Christian Catholic Church (now Christ Community Church).

The church was formally organized on February 22, 1896 in Chicago, and in 1899, Dowie announced that he’d purchased six thousand acres which were to become the City of Zion (incorporated July 15, 1901). Sure enough, the centerpiece of the city was the church, built to accommodate 8,000 people.

Dowie’s unusual ministry (he was an energetic, visionary leader who prayed for healing – and saw healing – for thousands) attracted people from all over the world. They came to be part of what God was doing in Zion – both the church and the city, which in those early days were inextricably related.

After Dowie’s death, Zion suffered financially for some of its leader’s mistakes. Utopian dreams had to be scaled back to match reality. But the church continued a tradition of innovative thinking. Under Wilbur Voliva, Dowie’s successor, the Zion Passion Play and Zion Conservatory of Music were created. Under Michael Mintern, the next pastor (then called “overseer”), Camp Zion was developed in Door County, Wisconsin. Carl Lee led the church into rebuilding after fire destroyed its worship space. During Roger Ottersen’s tenure, the church revived a significant work begun in the early 1900s among millions of southern Africans who trace their spiritual roots to Zion.

During the interim between Ottersen and current Senior Pastor Ken Langley, our name was changed to Christ Community Church. “Christian Catholic Church” still serves as the name for our world-wide fellowship of congregations and mission works. (Source)

The Tabernacle, the home of the Christian Catholic Church, completed in 1902 with a capacity of 8,000 people
Retrieved from ‘http://wiki.tfes.org/index.php?title=Christian_Catholic_Apostolic_Church&oldid=8492’
Category: