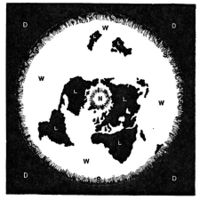 The Flat Earth is laid out like a North-Azimuthal projection. The North Pole is at the center while Antarctica is at the rim. The continents are spread out around the North Pole.

Circumnavigation on an FE is achieved because on a compass East and West are always at right angles to North. Traveling Eastwards continuously takes you in a circle around the North Pole. East and West are curved.

As it happens, on an RE you do not travel perfectly straight when traveling East or West either. Consider this thought experiment:

You are standing 10 feet away from the North Pole. You are then directed to travel East and are instructed to continue to do so. What happens to your path? You end up traveling in a circle, and not in a straight line that you previously thought you would.

The exact same thing happens regardless of where are you on the Earth. Your path will not be straight without you having to constantly change the direction you are traveling in reference to a compass.

Q. What about traveling North-South across the ring of ice which surrounds the known world?