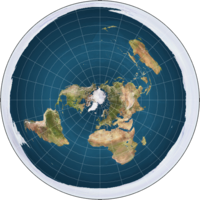 As it happens, on a Round Earth you do not travel perfectly straight when traveling East or West either. Consider this thought experiment: