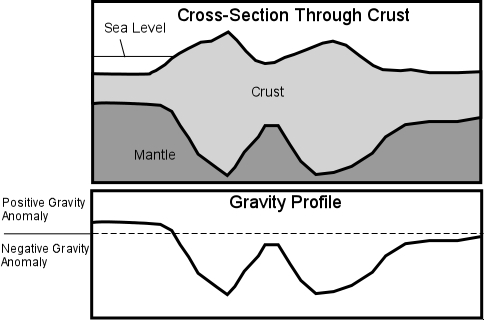 One alternative explanation as to why the gravity readings appear to be opposite from expected may be related to what the Gravimeter device is actually detecting in study of the Earth's topography. In the article Gravimetry the gravimeter is described by contemporary sources to be a seismometer which does not detect gravity directly, but is instead detecting the alleged density variations caused by gravity in the subseismic band. It is suggested in the article that rather than gravity-induced density variations, the device is merely measuring background subseismic activity from within the Earth, which is why the highest gravity anomalies are correlated with the seismic zones. If this were true, it should be a natural expectation that a mountain would dampen the subseismic waves which emanate up from the Earth, producing negative readings in mountainous areas as compared to other areas.