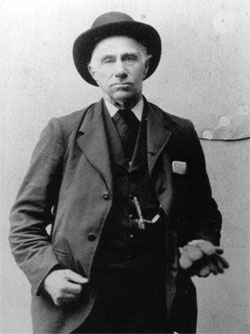 Joseph Holden (1815-1900) was a prominent American Flat Earth lecturer in the late 19th Century. The son of a sawmill owner in Otisfield, Ohio, Holden was a former justice of the peace, trial justice, candidate for state senator and census enumerator before beginning to lecture at the age of 75. Much like Lady Blount, Holden used a non-confrontational approach in his lectures and was well-liked by both believers and non-believers who attended his lectures. Holden appealed to common-sense evidence to argue his position. One of his more famous experiments was to set a pail of water atop a pole overnight and check it in the morning. His assertion was that a revolving Earth would have moved the pail. As expected, the pail was in its original place the next morning.

From http://www.rootsweb.ancestry.com/~mecotisf/bicenhs.htm: Probably the best known citizen of Rayville is Joseph W. Holden (1815-1900), mill owner and later prominent member of the Flat Earth Society. Because Joe Holden willed a small sum in support of a Sunday School picnic, East Otisfield still celebrates a Joe Holden Day each summer, honoring "the old astronomer" who, as the inscription of his gravestone tells, "discovered that the Earth is flat and stationary, and that the sun and moon do move."