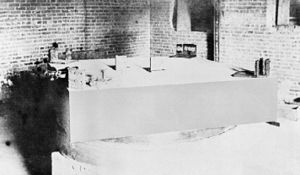 At the time it was held that in order for light to travel through space it was necessary that there was a medium filling the void through which it could propagate, much like how sound waves travel through the air or ripples in water. This background medium of space was colloquially known as 'aether'. The goal of the Michelson–Morley experiment was to compare the speed of light in perpendicular horizontal directions at various times of the day, in an attempt to detect the relative motion of matter through the stationary luminiferous aether by using the rotation of the earth and its motion around the sun to create interference bands of light for the study. Morley wrote to his father that the purpose of the experiment was “to see if light travels with the same velocity in all directions.”1

The shocking result of this experiment is that the earth did not measurably move around the sun at all, in contradiction to all expectations and the accepted astronomical model. Michelson and Morley found that a light beam discharged horizontally in the direction of the Earth’s assumed motion showed virtually no difference in speed from a light beam discharged north to south or south to north. In other words, the experiment failed to detect the Earth moving in or against space, of whatever space was understood to consist.

Michelson and Morley and later scientists repeated the experiment many times, and in many different horizontal axial positions and configurations, at different times of the day, all with a null result. The earth was seen to be motionless. The experiment has been referred to as "the moving-off point for the theoretical aspects of the Second Scientific Revolution"3 and directly influenced the creation of Albert Einstein's Theory of Special Relativity.

The Theory of Special Relativity subsequently found favor among scientific circles because the second postulate of Special Relativity provided an illusion where the velocity of light is constant to all observers, and seemingly explained the motionless earth result of the Michelson-Morley experiment. This fundamental change to the nature of space and time allowed the theory of the earth's motion around the sun to survive direct contradicting experimental evidence and encouraged, perhaps forced, its adoption as the accepted model of space for Copernicanism. 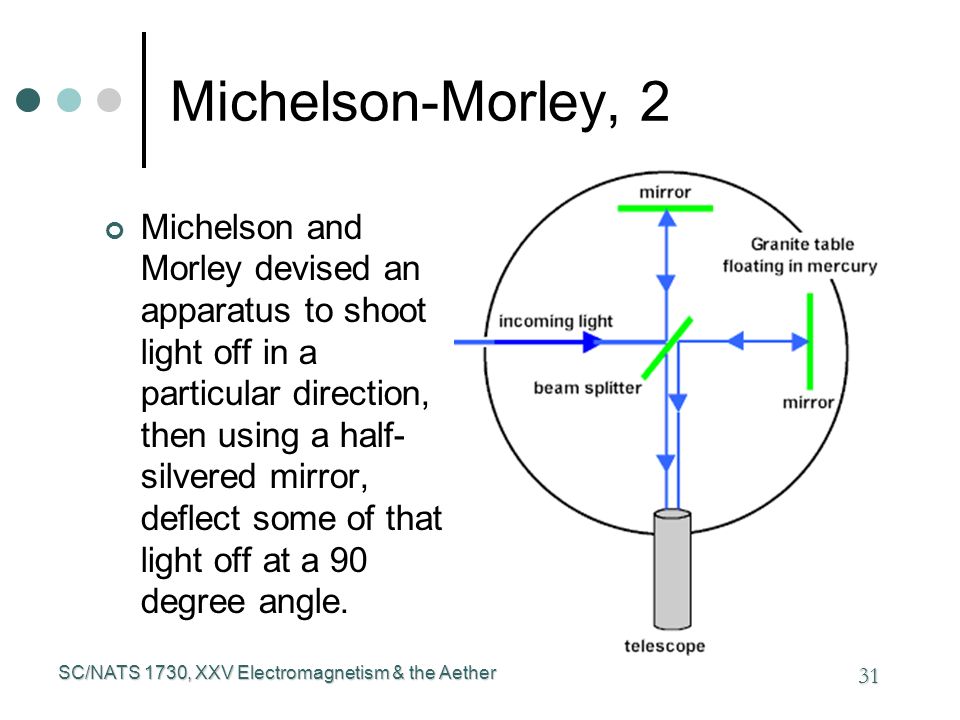 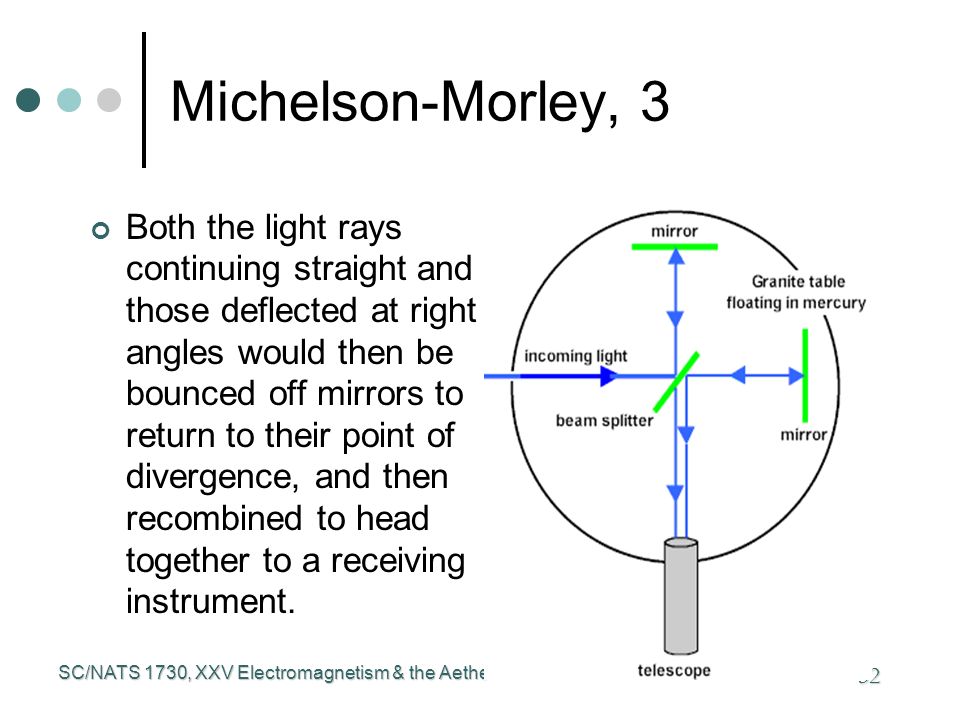 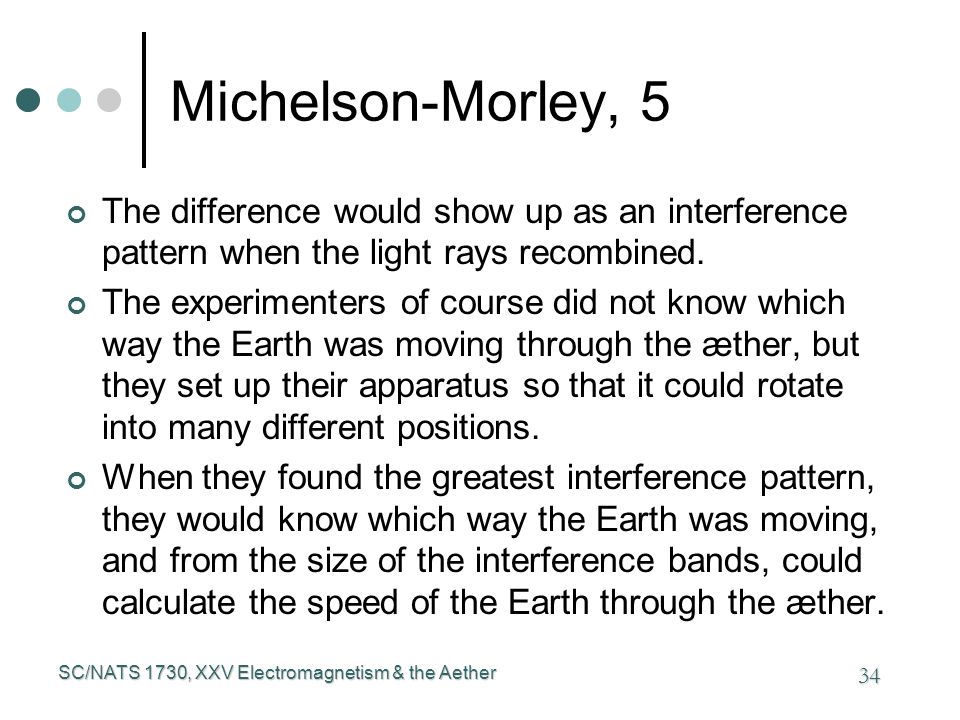 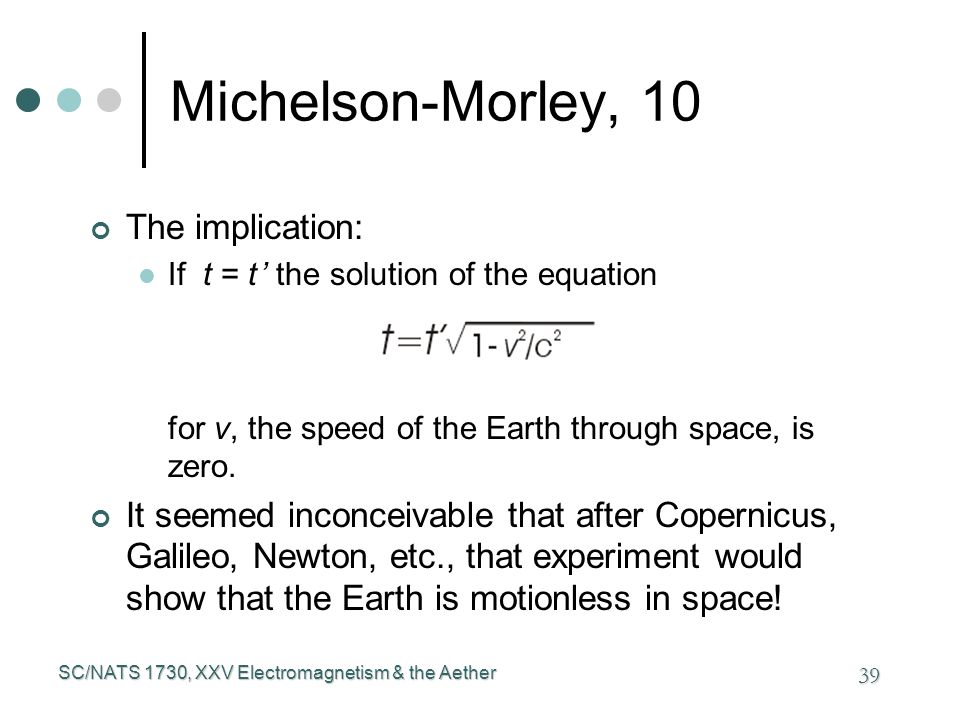 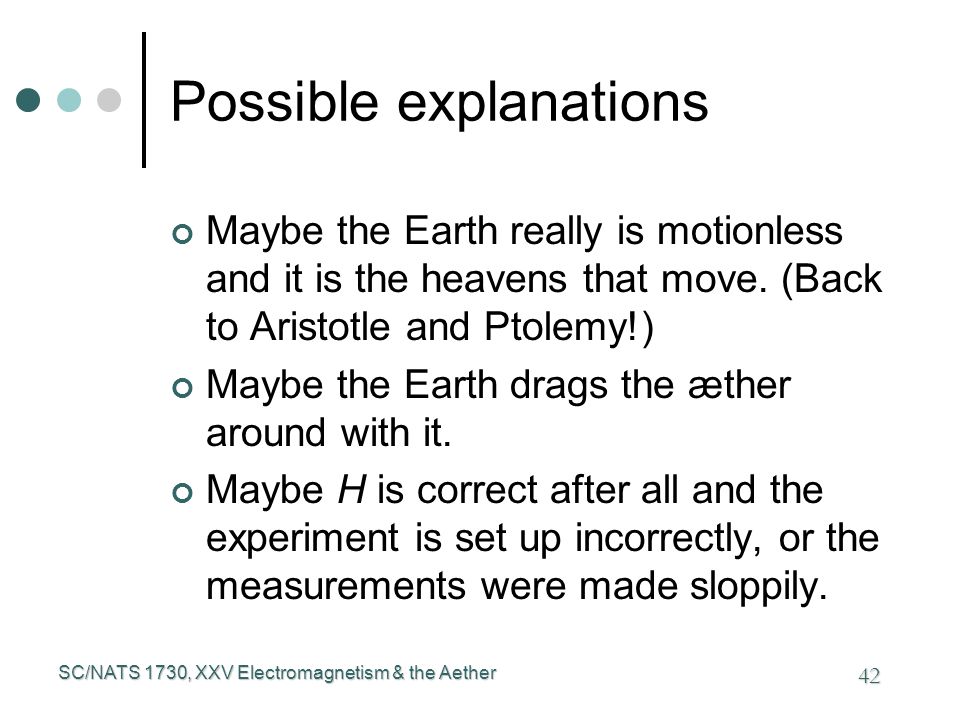 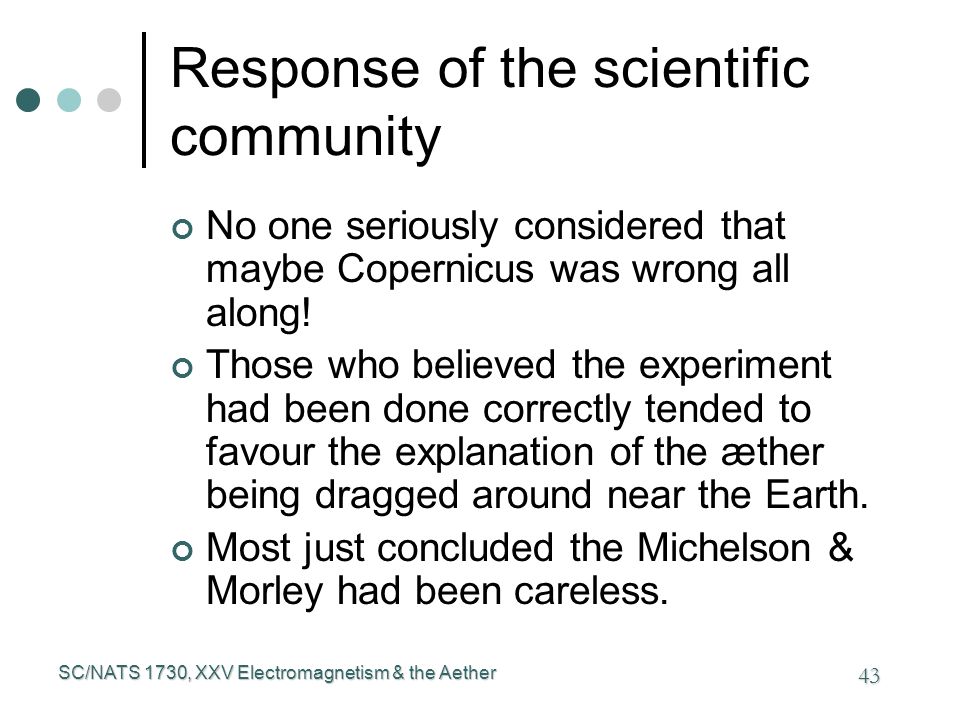 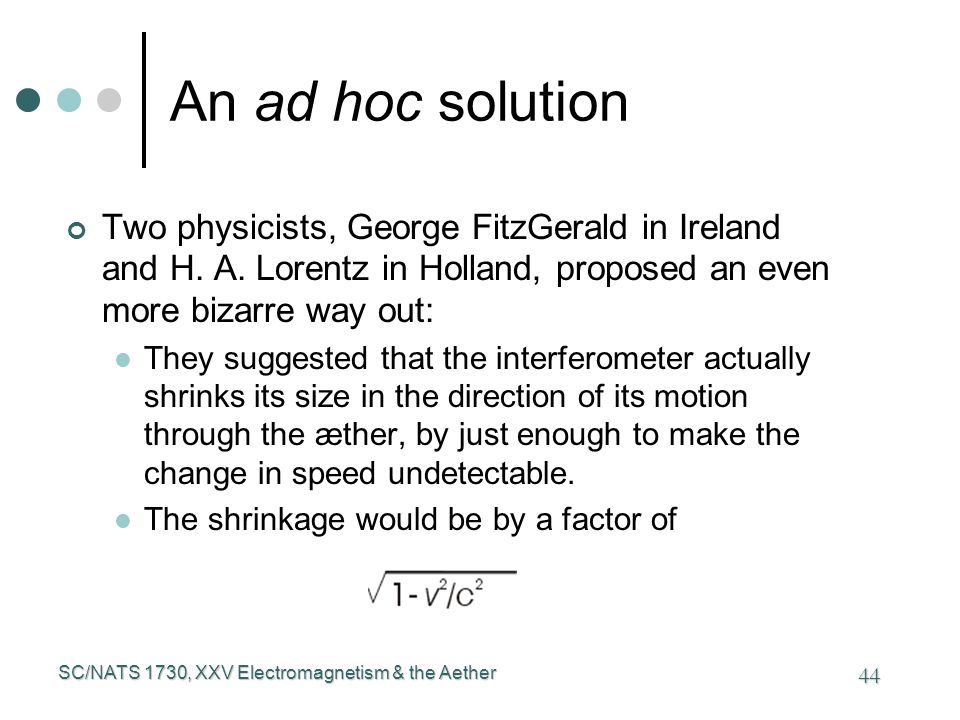 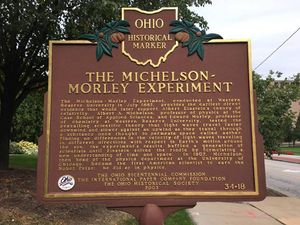 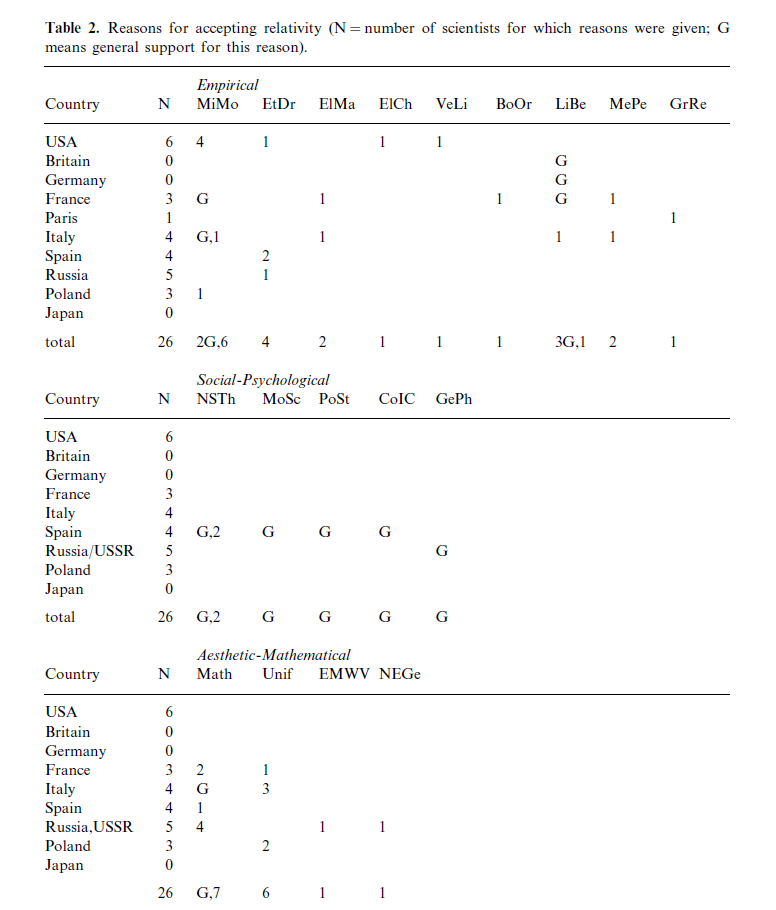 “ If you haven't given much thought to the implications of twentieth-century science, you may be chagrined...to realize that because of the concept of relative motion, no one can prove that the Earth moves. ”
—Kitty Ferguson, Measuring the Universe, 1999, p. 106, 107

“ No physical experiment ever proved that the Earth actually is in motion. ”
—Lincoln Barnett, The Universe and Dr. Einstein, 2nd rev. edition, 1957, p. 73.

“ In the effort to explain the Michelson-Morley experiment...the thought was advanced that the Earth might be stationary. ”
—Creator of the first IQ test - Arthur S. Otis

“ The experiment was tried again by Morley and by others, with the same conclusion; the apparent velocity of the earth through the ether was zero. ”
—Historian Lincoln Barnett, The Universe and Dr. Einstein, p. 44.

“ The easiest explanation was that the earth was fixed in the ether and that everything else in the universe moved with respect to the earth and the ether …Such an idea was not considered seriously ”
—James A. Coleman, Relativity for the Layman, p. 37.

“ It could have detected speeds as low as two miles a second instead of the known 20mps that the earth as in its orbital motion around the sun. It didn’t detect it. What’s the conclusion from the Michelson‐Morley experiment? The implication is that the earth is not moving ”
—Professor of Physics Richard Wolfson- “The Teaching Company”, episode taught at Middlebury College.

“ This conclusion directly contradicts the explanation... which presupposes that the Earth moves. ”
—Albert Michelson (Albert A. Michelson, “The Relative Motion of the Earth and the Luminiferous Ether,” American Journal of Science, Vol. 22, August 1881, p. 125)

“ There was just one alternative; the earth's true velocity through space might happen to have been nil. ”
—Arthur Eddington, The Nature of the Physical World, 1929, pp. 11, 8

“ The data were almost unbelievable… There was only one other possible conclusion to draw — that the Earth was at rest....This, of course, was preposterous ”
—Bernard Jaffe, Michelson and the Speed of Light, 1960, p. 76

“ ...to the question whether or not the motion of the Earth in space can be made perceptible in terrestrial experiments. We have already remarked... that all attempts of this nature led to a negative result. Before the theory of relativity was put forward, it was difficult to become reconciled to this negative result. ”
—Relativity — The Special and General Theory, cited in Stephen Hawking's, 'A Stubbornly Persistent Illusion', 2007, p. 169.

“ This ‘null’ result was one of the great puzzles of physics at the end of the nineteenth century. One possibility was that...v would be zero and no fringe shift would be expected. But this implies that the earth is somehow a preferred object; only with respect to the earth would the speed of light be c as predicted by Maxwell’s equations. This is tantamount to assuming that the earth is the central body of the universe. ”
—Physicist Douglas C. Giancoli, Physics: Principles with Applications, 1985, pp. 613-614 and 1980, p. 625.