It has been determined that, at times, the sinking ship can be caused by the swells on the water between the observer and the target body.

The following image was provided to us as evidence for Earth's curvature: 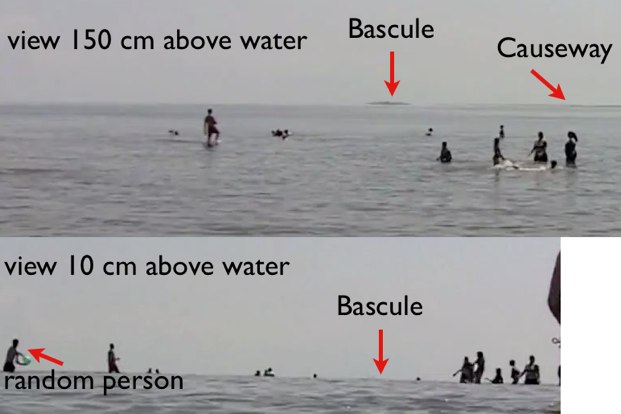 “ [...] there is a wave in the way on your picture. The earth does not curve by a foot to cover the bodies of people just 20 yards in front of you. ”

“ Brilliant use of a picture to show that relative altitude and obstructions at distance produce the "sinking ship" effect, and not the curvature of the earth. Thank you. ”

On The Dimensions of Ocean Waves

In Earth Not a Globe its author provides a citation from "On the Dimensions of Ocean Waves" by Admiral Coupvent de Bois:

“ It is not easy to ascertain the height of the waves of the ocean; nevertheless, the method adopted for the purpose is capable of affording sufficiently exact results. The point in the shrouds corresponding with a tangent to the tops of the highest waves is ascertained by gradually ascending them, and making observations until it is reached. That point being determined, the known dimensions of the ship give the height of the waves above the line of flotation, which corresponds with the horizon of the sea, in the trough of the wave. In this way the following results were obtained:-- ”

“ The lengths of the waves have also been measured, and it has been found that, for example, waves of 27 feet in height, are about 1640 feet in length. ”