As result of theThree Body Problem mathematicians have opted to create special algorithms for use in multi-body problems as a method of keeping the system stable. Symplectic Integrators are special geometric integrators which preserve the geometry of an orbit.

“ Simulating the dynamics of the Sun–Earth–Moon system with a standard algorithm yields a dramatically wrong solution, predicting that the Moon is ejected from its orbit. In contrast, a well chosen algorithm with the same initial data yields the correct behavior. We explain the main ideas of how the evolution of the solar system can be computed over long times by taking advantage of so-called geometric numerical methods. Short sample codes are provided for the Sun–Earth–Moon system. ”

The standard algorithms produce 'wrong solution' because the Moon is ejected from its orbit. A different algorithm is necessary to keep it together, and produces the 'correct' behavior. The paper describes that the algorithm which keeps it together is the symplectic integrator.

“ The symplectic method, an integrator that preserves the energy well over long times. ”

A diagram shows a comparison:

A history of the n-body problem is given:

History - Is the Solar System Stable?

“ A question closely related to the topic of this snapshot is the issue of the stability of the solar system. Soon after Newton proposed his universal law of gravitation, many researchers, including, amongst others, Pierre-Simon Laplace (1749–1827), Joseph-Louis Lagrange (1736–1813), and Siméon Denis Poisson (1781–1840), were studying the question whether the regular trajectories of the planets will continue nicely until the end of times, or if collisions or ejections will occur.

In 1885, King Oscar II of Sweden sponsored a competition about this question. The prize was awarded to Henri Poincaré (1854–1912), although he did not really solve the problem. His contribution, however, is at the origin of the theory of dynamical systems. It also led to important developments in “Hamiltonian perturbation theory” and gave rise to the so-called Kolmogorov–Arnold–Moser (KAM) theory, which deals with the persistence of quasi-periodic motions under small perturbations, see the survey [7]. Unfortunately, this beautiful theory does not apply to realistic solar system models. ”

“ We have seen that the energy, a key invariant of all mechanical systems, is well preserved by the symplectic Euler method. In contrast, the explicit Euler method, and more generally any standard explicit Runge–Kutta methods, do not preserve it and are thus not suitable for integration over long time intervals. A mathematical theory called “backward error analysis” permits to demonstrate that symplectic integrators have a good energy conservation for such mechanical systems. ”

A special integrator, called symplectic integrators, which preserves the energy and prevents the body from escaping is used, and is therefore 'more suitable'. Does this sound like a full clean simulation of gravity?

The following is a paper which looks at symplectic and non-symplectic simulations and says that symplectic integrators always give stable conditions regardless of the perturbations which affects the body:

“ Revisiting Table I, the non-symplectic integrators do not give a stable solution even at time step of 1e-4. The solutions from these integrators are chaotic and shoot off to infinity.

We read that the non-sympletic integrators do not give stable solutions, while symplectic integrators are "always able to return to stable conditions after perturbations".

Does an algorithm which always returns to stable conditions sound like one which accurately represents reality?

The purpose of the symplectic integrator is to preserve the area or geometry of the phase space.

Further down in the document:

“ A combination of the position space and momentum space is known as phase space. Thus phase space has six dimensions. A point in phase space is, therefore, completely specified by six coordinates x, y, z, px, py, pz. Complete information about any particle in a dynamic system can be obtained from a knowledge of these six co-ordinates which completely determine its position as well as momentum. As there are n particles a knowledge of 6n co-ordinates gives complete information regarding position and momentum of all then particles in the phase space for a dynamic system. The concept of phase space is very useful while dealing with dynamical systems actually existing in nature. ”

Scrolling up to section 10.2 we read the definitions of Position Space, verifying that it is the normal x, y, z position coordinates:

“ The three dimensional space in which the location of a particle is completely given by the three positions coordinates, is known as position space. ” 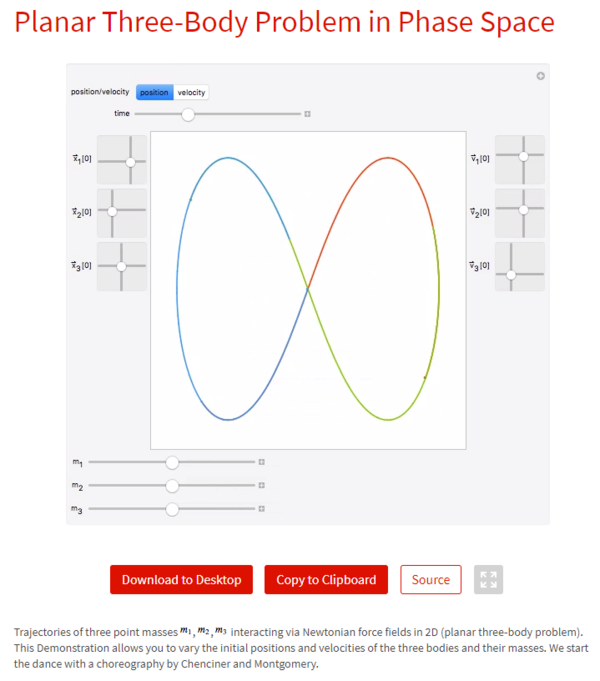 Compare the above to the Figure Eight Three Body Problem solution in Position Space, plotted on the x and y. 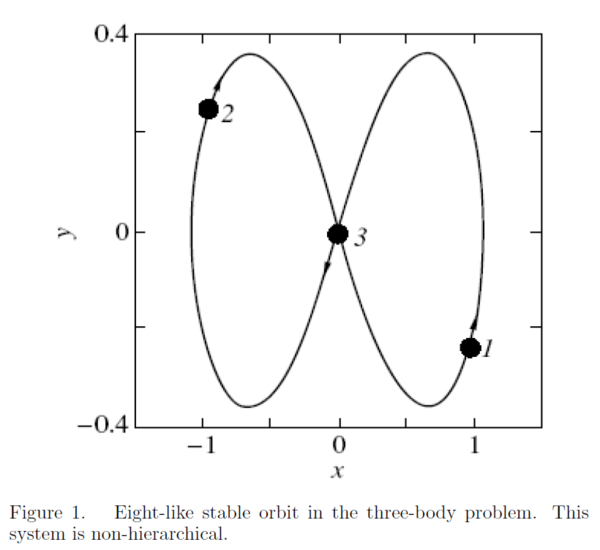 Plotted on the x and y, and looks surprisingly like the Phase Space version.

It looks the same because it is the same. Phase Space is merely Position Space with detail in additional dimensions which represents momentum. The shape of an orbit represents geometry, as well as energy loss/gain.