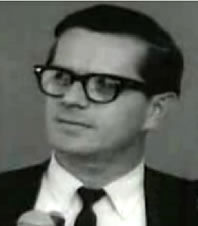 Thomas Baron Silenced for Attempting to Expose the Truth

During the start of the Apollo missions former NASA Safety Inspector Thomas Ronald Baron participated in a Congressional Hearing where he complained that NASA was not operating a real space program.

He complained about NASA's fraudulent practices, low quality control, and the practice of keeping every employee in the dark about the big picture. R. E. Reyes, an engineer in KSC's Preflight Operations Branch, said Baron filed so many negative charges against NASA that, had KSC heeded them all, NASA would not have had a man on the moon until the year 2069.

Baron testified before congress that the Apollo program was such disarray the United States would never make it to the moon. His claim and his opinions made him the target.

Then, ironically, Baron himself was stopped in his tracks. Exactly one week after he testified before Congress and only days before his report was set to be released Baron's car was stocked by a train. Baron, his wife and his step daughter were killed instantly. The incident was deemed by the police to be an accident. Baron's unpublished 500 page Congressional Report detailing the specific deficiencies of the Apollo program was never found.