The World Geodetic System 1984 (WGS84) is an ellipsoid, datum and coordinate system (Archive) which is widely used in cartography, geodesy and navigation fields, including use with Google Maps. WGS84 represents the world with a spherical coordinate system. Such discussions on this topic often revolve around the claim that, since WGS84 provides accurate information and represents the earth as a sphere, it must be evidence that the earth is a sphere.

When assessing this claim it is found that the process is a complex system which pulls information from a large collection of smaller flat maps to provide information to users.[1] The spherical coordinates of the WGS84 are temporarily reprojected onto a map with planar coordinates in order to provide accurate geospatial data.[2] Latitude and Longitude is described as unreliable and not used to measure distances or area.[3].

A Geographic Coordinate System is a spherical coordinate system which uses longitude and latitude.

From What are geographic coordinate systems? (Archive) by ArcGIS:

“ A geographic coordinate system (GCS) uses a three-dimensional spherical surface to define locations on the earth. A GCS is often incorrectly called a datum, but a datum is only one part of a GCS. A GCS includes an angular unit of measure, a prime meridian, and a datum (based on a spheroid). ”

A Projected Coordinate System is a planar coordinate system.

From What are Projected Coordinate Systems? (Archive) by ArcGIS:

A Datum is an anchor point which ties two different coordinate systems (geographic and projected) together.

From Datums by ArcGIS (Archive) we read:

“ While a spheroid approximates the shape of the earth, a datum defines the position of the spheroid relative to the center of the earth. A datum provides a frame of reference for measuring locations on the surface of the earth. It defines the origin and orientation of latitude and longitude lines. ”

State Plane Coordinate Systems are widely used for geographic data, and are based on a flat earth 'plane surveying' methods with simple XY coordinates:

“ The State Plane Coordinate System (SPS or SPCS) is a set of 124 geographic zones or coordinate systems designed for specific regions of the United States. Each state contains one or more state plane zones, the boundaries of which usually follow county lines. There are 110 zones in the contiguous US, with 10 more in Alaska, 5 in Hawaii, and one for Puerto Rico and US Virgin Islands. The system is widely used for geographic data by state and local governments. Its popularity is due to at least two factors. First, it uses a simple Cartesian coordinate system to specify locations rather than a more complex spherical coordinate system (the geographic coordinate system of latitude and longitude). By using the Cartesian coordinate system's simple XY coordinates, "plane surveying" methods can be used, speeding up and simplifying calculations. ”

Lower down in that article we read that the State Plane Coordinate Systems are associated with the North American Datum of 1983:

“ Originally, the state plane coordinate systems were based on the North American Datum of 1927 (NAD27). Later, the more accurate North American Datum of 1983 (NAD83) became the standard (a geodetic datum is the way a coordinate system is linked to the physical Earth). More recently there has been an effort to increase the accuracy of the NAD83 datum using technology that was not available in 1983. ”

The Earth is Not Round!

The Earth is Not Round! Utah, NAD83 and WebMercator Projections (Archive)
By the Utah Automated Geographic Reference Center

Utah's Automated Geographic Reference Center provides an article with a descriptive title of "The Earth is Not Round!" which explains the coordinate systems in use and how the flat earth maps tie into the spherical coordinate systems for data retrieval. NAD83 is the mentioned as the best coordinate system for geospacial data:

NAD83, as we recall above, is based on a planar coordinate system.

On Web Mercator, which is a web-based version WGS84 and is used in services such as Google Maps, the article explains:

“ Web Mercator's significant weakness is that measurements of distance and area in its native coordinates are completely unusable. Where accurate distance and area calculations are needed, web-mercator GIS data must be temporarily reprojected to a more suitable coordinate system (UTM NAD83). AGRC has begun building web applications in Web Mercator and uses web service calls that do the necessary temporary reprojection to get accurate lengths and areas for newly created or edited geographic features. ”

We are told that Web Mercator has unusable native coordinates. GIS data is temporarily re-projected onto NAD83 for usable measurement of distances.

If this article were intended to show that the platform is displaying round earth distances and measurements, Utah would surely have titled the article something more along the lines of "The Earth is Round!"

From the 'The Earth is Not Round!' article it is mentioned "The UTM NAD83 projection uses the GRS80 ellipsoid and a center-of-the-earth anchor point as its datum." It has been asked what the ellipsoid and center-of-earth anchor point that is associated with the NAD83 is referring to. If the NAD83 is composed of state plane maps with a flat XY coordinate system, why is there a reference to involvement of a globe model?

The answer to this is that the ellipsoid and anchor point datum associated with NASD83 is necessary to interconnect with other spherical coordinate systems such as WSG84, in order to connect correctly at the correct location and interchange data.

The article discusses the WGS84 round earth datum:

“ Geographic coordinates use latitude and longitude values to define positions on the 3D surface of the earth, which is of course, best modeled as an ellipsoid, not a sphere. The ellipsoid and its accompanying anchor point that ties it in to the real world, are known collectively as the WGS84 datum. ”

“ UTM NAD83 is a projected coordinate system that represents physical locations abstracted to a flat, cartesian coordinate system. The UTM NAD83 projection uses the GRS80 ellipsoid and a center-of-the-earth anchor point as its datum ”

The passage is speaking of anchor points to connect the two types of systems together.

The accompanying image from the article is the flat map with anchor point: 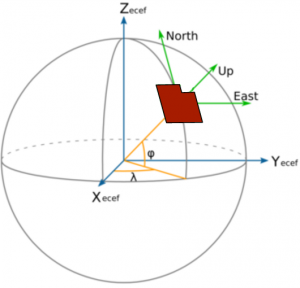 Latitude and Longitude Not Used

From the Earth is Not Round! article we read:

“ Geographic coordinates use latitude and longitude values to define positions on the 3D surface of the earth, which is of course, best modeled as an ellipsoid, not a sphere.

Latitude and Longitude are useless for measuring distance and area because the unit of length, degrees, is not held constant for longitude, except along parallels -- individual perfectly east-west lines.

Web Mercator's [web based WGS84] significant weakness is that measurements of distance and area in its native coordinates are completely unusable. ”

Could those who believe that the Earth is Not Round! article is describing a system which distributes round earth measurements kindly explain to us how it works without using the spherical coordinate system of latitude and longitude? We would really like to know.

WGS84 relies on flat projections to give out accurate data.

“ In the meantime, here are a few of the main differences between WGS 84 and NAD83:

The coordinate system for WGS 84 is geographic, and the NAD83 system is projected. ”

WGS84 itself does not define a projection, and requires a flat coordinate system for operation:

“ WGS84 doesn't define a projection, so it's up to the GIS software to decide which projection to use for displaying the data on the screen (unless you manually pick a projection, of course). ”

Next we take a look at the list of projections for the ARCGIS software:

This is a long list of the world-wide transformation tables used with ARCGIS, of which NAD83 is listed as one of them. These are all flat coordinate systems and their associated transformations. WGS 84 is taking data from flat systems because, as the "Earth is Not Round!" article describes, these flat systems give out more accurate figures.

Spherical Coordinates Projected To a Plane

We find further references that the process involves projecting a curved surface of geodetic positions onto a plane:

“ The State Plane Coordinate System was established to provide a means for transferring the geodetic positions of monumented points to plane coordinates that would permit the use of these monuments in plane surveying over relatively large areas without introducing significant error.

A plane-rectangular coordinate system is by definition a flat surface. Geodetic positions on the curved surface of the earth must be “projected” to their corresponding plane coordinate positions. Projecting the curved surface onto a plane requires some form of deformation. Imagine the stretching and tearing necessary to flatten a piece of orange peel. In California the Lambert Conformal map projection is used to transform the geodetic positions of latitude and longitude into the y (Northing) and x (Easting) coordinates of the CCS83. ”

Spherical coordinates are projected to the plane coordinates. Not the other way around. Further, they "must" be projected.

The article goes on at length on the round WGS84 and the flat NAD83 coordinate systems.

“ What is a geographic coordinate system?

Of interest, some latitude and longitude coordinate transformations are not publicly known.

“ Why are there so many transformations?

We find several sources which describe that flat maps and plane surveying are the standard in GIS work.

A comment by a surveyor named Jerry McGray, RPLS (Archive):

“ A decade or two ago, I was the instructor for some introductory surveying courses at a community college. In the first class we would define “plane surveying” as surveying that did not take into consideration the curvature of earth, and “geodetic surveying” as that which did. That was about the only time the two categories received anywhere near equal attention. Oh, we would point out (still in that first lecture) some of the real-world evidence of a non-flat earth, such as the fact that the length of an 11.5-mile arc on the earth's surface is only five hundredths of a foot longer than its subtended chord, or that the sum of the angles in a spherical triangle on the earth’s surface having an area of 75 square miles is only one second greater than the angle sum of the same size plane triangle. (Even today I get a kick out of those dramatic tidbits. I’m sure a real geodesist would roll his or her eyes at such trivia!) But those examples were used as reasons for not focusing—no, for not mentioning—geodetic concepts for the rest of the semester. We would end the ten-minute token nod to geodetic surveying with the tongue-in-cheek remark, “Therefore, for this class, we will respect the time-honored principle handed down through the ages—that the earth is flat.” And, truth be known, that’s probably not a bad narrowing of a dauntingly broad subject.

But more than narrowing, it was simply that few rank-and-file surveyors in private practice ever had occasion to use geodetic concepts in their daily work. Even when we dutifully enrolled in the occasional State Plane Coordinate seminar, the principles quickly faded from memory from lack of use. If a surveyor from the general population had ever even heard of the geoid and its relationship to the ellipsoid, and where mean sea level fit into the picture, hearing about it was as far it went. ”