Take a good hard look at image AS11-40-5922 from Apollo 11, which was allegedly taken from the moon's surface. This six billion dollar fine piece of American engineering landed men on the moon. 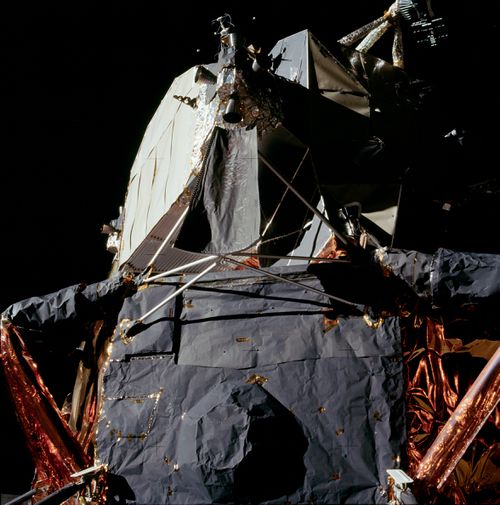 Open the above image in a new window and make sure it is expanded to its full size.

Upon close inspection one might notice that the Lunar Lander, a supposed six billion dollar hallmark of American engineering, is in truth made out of cardboard paper, a few old curtain rods, a roll of roofing paper, some floodlight holders, gold foil, and lots and lots of scotch tape to hold it all together on the hostile environment of the moon's surface.

“ Anyone who thinks that this landed and launched from the surface of the moon and that grown men lived in it with their space car is sadly deluded. ”
—Tom Bishop

“ I've got to agree with Tom. That picture he posted looks bogus as hell. If you zoom in, you can see the outside paper-looking material is literally held together with tape in a bunch of places. Yes, tape. It looks to me like trying to sail around in the ocean in a tennis shoe. ”
—Mizzle

“ As far as I'm concerned, that picture clinched it. That is the saddest contraption duct-taped together and wrapped in tinfoil I have ever seen. There is no way that could support even a single person for the space of ten seconds, let alone what NASA claimed it did. ”
—Cheryl Wiesbaden

“ It doesn’t matter how much cardboard, gold foil, ‘band aid’, duct tape is used in the space industry, because underneath the trashy outward appearance the fancy high-tech is hidden. Even when it looks like total junk it’s sturdy enough for deep space missions, launches and whatever it takes to go to space.

I am sure we’ll get a very reasonable and well thought answer as to why we are stupid and simply don’t understand. ”
—Dutchy