The City of Toronto is often brought up as a topic of discussion, as observation from across Lake Ontario have shown that the city can appear to be sunken. This is given as evidence for the curvature of the Earth.

It has been questioned why the CN Tower appears two-thirds as tall as it should. The following image is provided, showing that an overlay of an unobstructed view of the city shows that a significant part of the tower is 'below the horizon'. One-third of the tower appears to be missing: 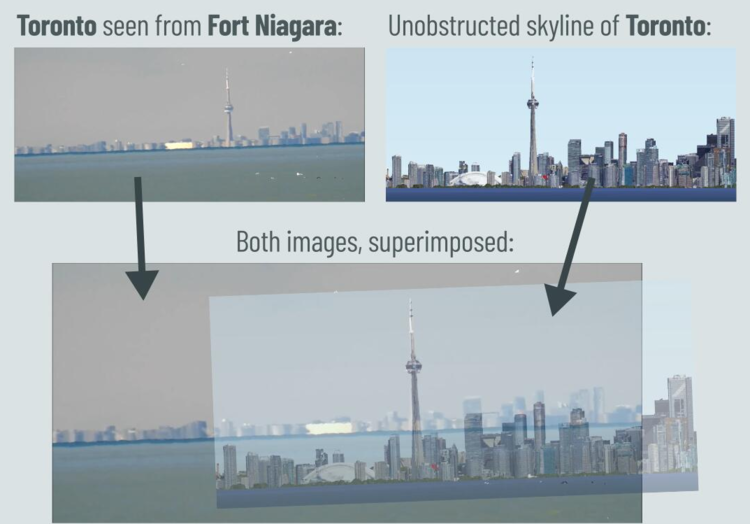 The final superimposed image does show that part of the tower appears to be missing. But it also suggests that the Earth should obscure the buildings to the left of the CN Tower, showing that it is not actually the curvature of the Earth causing this phenomenon. This appears to be a mistaken set of assumptions. The "sunken" scene taken from Fort Niagara appears to be a compression effect, and this compression is mistaken with curvature.

According to curvature calculations when looking across thirty miles of lake from a position near the Earth's surface there should be a considerable bulge. Related observations show that the Rogers Center Dome can be seen to be above the horizon line, in contradiction to geometric calculators for the observing position.

From the video description:

“ The Rogers Center Dome should be under 50+ feet of curvature. 30.86 miles away...camera elevation was 37 feet above lake level. ”