One point of discussion are distances and travel times. According to the classic Flat Earth Monopole Model with an Antarctic rim the East-West distances will diverge and spread apart as they recede beyond the equator towards the South. According to the Flat Earth Bi-Polar Model and the traditional Round Earth Model the distances beyond the equator will converge as they recede towards the South.

On this topic proponents of the Monopole Model generally point to various discrepancies.

Long haul flights between different continents in the South often want to take passengers on a long circuitous route through through the Northern Hemisphere with one or more stops to reach an opposite Southern Hemisphere point, which could take more than 24 hours to reach the destination. When these flights with stops are plotted onto a Flat Earth map (Archive) they tend to curiously straighten out on the Monopole Map into a straight line to the destination. This is given as a suggestive piece of evidence.

The focus in these discussions tends to steer towards the relatively few nonstop long haul flights between different continents which are said to exist in the Southern Hemisphere. Some question their existence or accuracy, pointing out NASA's heavy involvement in air traffic, including involvement in the air traffic of countries like Australia.

Others suggest that the flights which do travel directly in the South may be taking advantage of jet streams and abnormal wind conditions that are known to exist in the South. Various anomalous data is pointed out which may suggest this to be the case. It could be logical that there are anomalous wind conditions in the South due to the fundamental nature of the system. A bucket filled with water stirred with a wooden spoon will tend to have faster velocities at the edges than the center. It is natural that since the edges of the habitable area are an anomaly, as is the weather. A flight which flies faster in the South could be argued to confirm this concept.

A number of quotes can be found which suggest that the winds in the South are of an anomalous nature as compared to the North.

Faster Westerlies in the South

“ The higher speed and greater persistence of the westerlies in the Southern Hemisphere are caused by the difference in the atmospheric pressure patterns as well as its variation from that of the Northern hemisphere. The landmass in the southern hemisphere is comparatively less and average annual pressure decreases much more rapidly on the pole ward side of the high pressure belt. ”

The page Issues in Flight Analysis showcases various points, such that long haul flights use jet streams, that jet streams enable faster than sound flight, that flights are highly dependent on weather, and that nonstop flights can stop for fuel.

Jeran Campanella of Jeranism shows interesting anomalies with southern flights. Southern flights are curiously not tracked by satellite over most of their duration, causing the plane to hop around the map. From the sparse data available it is seen that True Airspeed can be seen to far exceed Ground Speed, suggesting that the flight is traveling faster than it thinks it is moving geographically, and much faster than the plane's rated cruising speed. The indicator switches between null and excessive speeds during its journey.

The directions as seen on a magnetic compass are anomalous when traveling from Chile to Australia. Max Igan reports that, according to his compass, when traveling between Chile and Australia that after takeoff the plane left Chile traveling towards the North-West and then towards the end of the flight it approached Australia from the South-West, despite his passenger terminal map displaying the RE directions. His experience is what should generally occur if the flight were traveling on a Flat Earth Monopole Model.

On a globe the flight should leave Chile from the South West and approach Australia from the North West:

On a Flat Earth Monopole Model the flight would leave Chile from the North West and approach Australia from the South West: 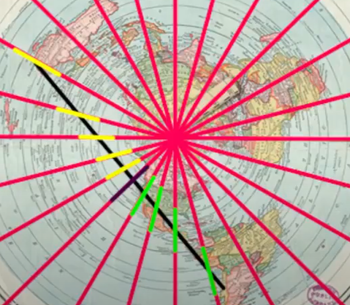 The above shows a straight line destination, but it is apparent that a curved path could also depart from the North West and arrive from the South West as well.

An interesting book 16 Emergency Landings Proving Flat Earth (pdf) by Eddie Alencar showcases examples where flights have made emergency stops which appear to align more with a Flat Earth model than with a Round Earth model. The book suggests that flights are not actually taking the RE routes, but are flying over the earth in line with a Flat Earth azimuthal projection.

Sydney to Houston North of Hawaii

Another analysis shows that flights traveling from Sydney, Australia to Houston, Texas fly North of Hawaii, when on a Round Earth the flights should travel South of Hawaii for the shortest route.