On the sinking ship, Rowbotham describes a mechanism by which the hull is hidden by the angular limits of perception - the ship will appear to intersect with the vanishing point and become lost to human perception as the hull's increasingly shallow path creates a tangent on which the hull is so close to the surface of the ocean that the two are indistinguishable. The ship's hull gets so close to the surface of the water as it recedes that they appear to merge together. Where bodies get so close together that they appear to merge is called the Vanishing Point. The Vanishing Point is created when the perspective lines are angled less than one minute of a degree. Hence, this effectively places the vanishing point a finite distance away from the observer.

Usually it is taught in art schools that the vanishing point is an infinite distance away from the observer, as so:

However, since man cannot perceive infinity due to human limitations, the perspective lines are modified and placed a finite distance away from the observer as so:

This finite distance to the vanishing point is what allows ships to shrink into horizon and disappear as their hulls intersect with the vanishing point from the bottom up. As the boat recedes into the distance its hull is gradually and perceptively appearing closer and closer to the surface of the sea. At a far off point the hull of the ship is so close to the sea's surface that it is impossible for the observer to tell ocean from hull.

While the sails of the ship may still be visible while the hull is perceptively merged, it's only a matter of time before it too shrinks into the vanishing point which rests on the surface of the sea and becomes indiscernible from the surface.

We know that this explanation is true because there are reports of half sunken ships restored by looking at them through telescopes. It has been found that the sinking ship effect is purely perceptual, that a good telescope with sufficient zoom will change the observer's perspective and bring the ship's hull back in full view. This is not possible if the ship were really behind a "hill of water." Hence, the effect which is usually thought to prove the earth as a globe really proves it to be a plane.

It's one of the first and primary proofs of a Flat Earth. The fact that a telescope can restore a half-sunken ship demonstrates that the ship is not traveling behind a convex earth. In the chapter "Disappearance of ships at sea" of the book Zetetic Cosmogony by Thomas Winship we read a number of accounts where the hulls of half sunken ships have been restored by the aid of a telescope:

From Zetetic Cosmogony (external link) by Thomas Winship we read: 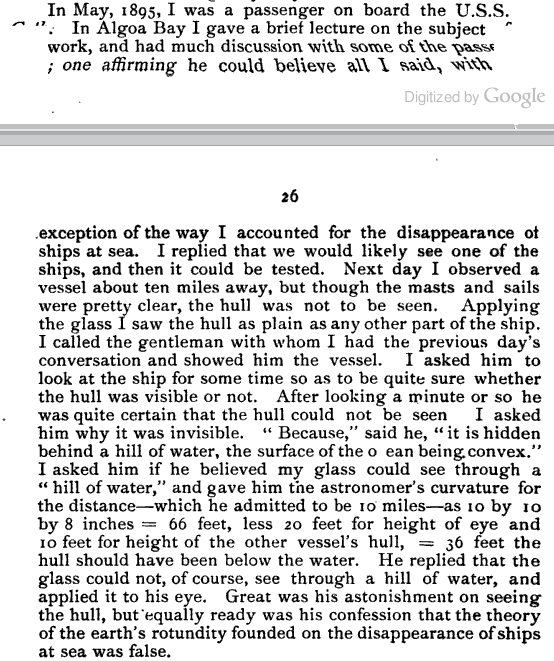 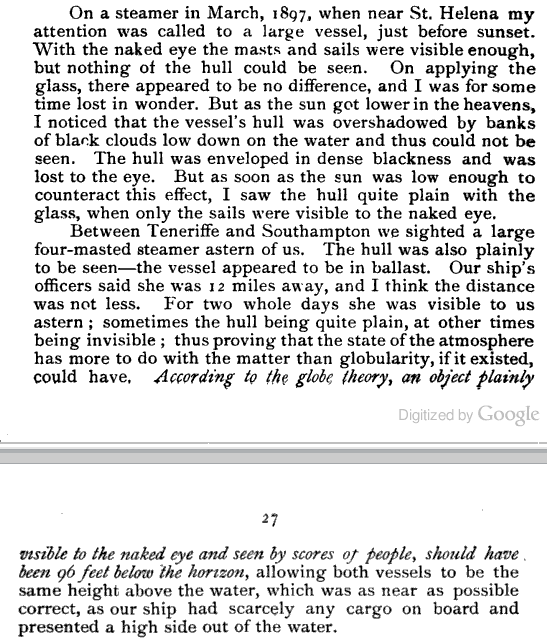 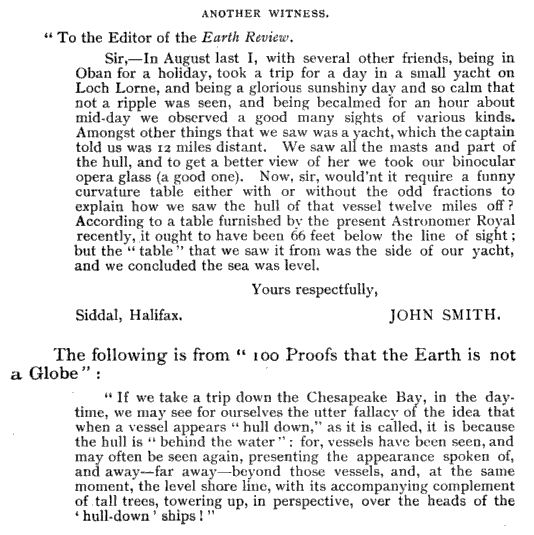 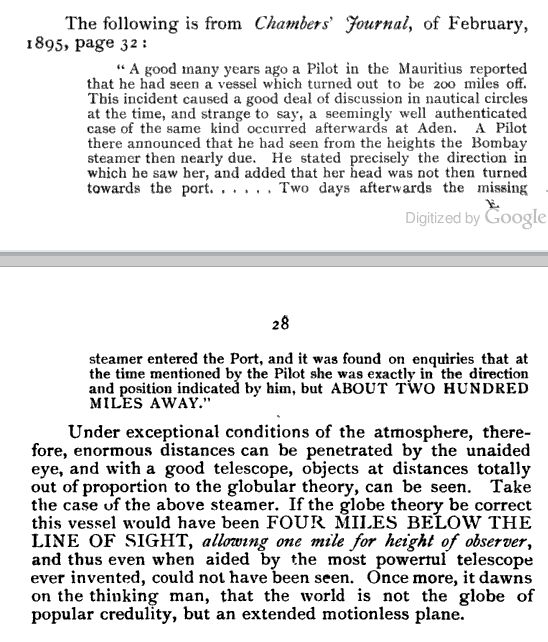 There are also accounts of restored hulls in the book Cellular Cosmogony:

“ On August 16 1896 from the Shore of lake Michigan, a very small portion of the top of the masts of a 40-feet high schooner were seen 12 miles away at 30 inches above the water with the naked eye. Opera glasses allowed half the height of the sails to be visible, whereas a 40x telescope enabled the vessel to be seen, including the hull. At 12 miles distant, the bottom of the hull would be 60 feet below the horizon of a convex surface; a clear 20 feet below the top of the mast. ”

A demonstration that lack of optical resolution may hide distant bodies may be found below. In the below video nothing is seen on the horizon by the camera sensor until the optical zoom is used and then the waves and boat become visible.