The Anti-Newtonian is a Flat Earth book published in 1819 and predates Rowbotham's initial work on the subject by 30 years. The model in The Anti-Newtonian features three aligned poles: A central North Pole, the South Pole at one end, and the "Unknown Pole" at the other end.

A copy of the book is available online through Google Books.

The writer of this book is unknown. The author refers to himself as "The Author". Since Samuel Birley Rowbotham was born in 1816 and was only three years in age at the time of its publishing it is unlikely that he was the author. The arguments made in The Anti-Newtonian are very unique, in that The Author bases most of his Flat Earth model on the behaviors of the sun. There are numerous details on why the Flat Earth model in The Anti-Newtonian must exist as consequence of the sun's actions.

In The Plane Truth: A History of the Flat Earth Movement its author Robert J. Schadewald describes this model.

“ In 1819, an anonymous author published a 38-page pamphlet entitled The Anti-Newtonian: or, A True System of the Universe, with a Map of Explanation, Proving the Sun to Be a Moveable Body and Central Circling Equator of Equal Time, etc. The work was printed in London at the author’s expense, but it contains no hint of who the writer was, where he lived, or any other biographical information except that he had previously published a work pointing out “the dangerous consequences of speculative astronomy.”

According to The Anti-Newtonian, the earth is a vast circular plain enclosed by a wall of ice. A map in the pamphlet shows the north pole at the center, the south pole at 12 o’clock, east and west respectively at 3 o’clock and 9 o’clock, and an “unknown pole” at 6 o’clock. The sun’s path is a circle whose center moves back and forth along a line connecting the south pole and the unknown pole to cause the seasons. The half of the earth beyond the east–west line toward the unknown pole is unknown and uninhabitable.

Rowbotham never mentions The Anti-Newtonian in any of his writings, but he almost certainly based his own system on it. He discarded the circumferential poles and the unknown, uninhabitable parts of the earth as unworkable. He left the north pole at the center, but he declared that there is no south pole; the impassable wall of ice encircling the known, inhabitable world forms the “southern limit.” East and west are merely those directions at right angles to the compass needle. The equator is a circle centered on the north pole and lying halfway between it and the southern limit. The sun circles above the earth in the region of the equator, moving north or south of the equator to suit the season. ”

The Three Pole model of The Anti-Newtonian is depicted with the following illustration from the text: 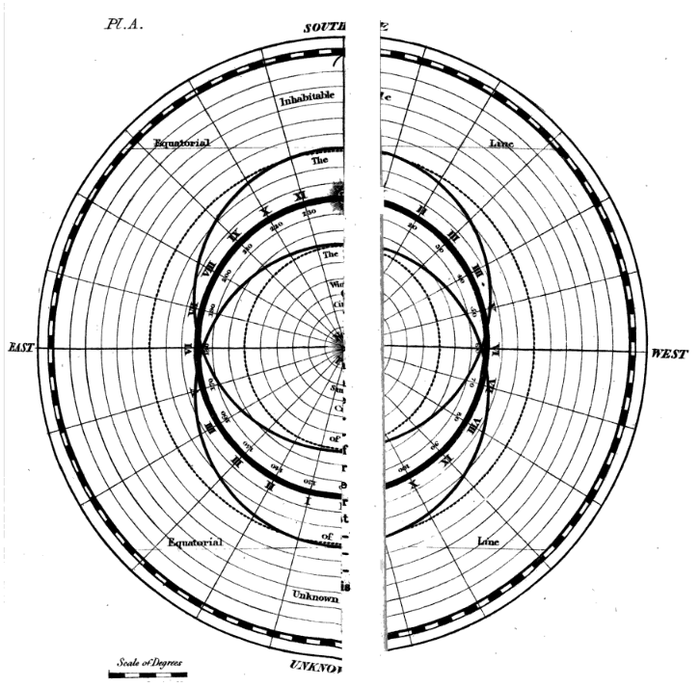 In the preface The Author hints that he had previously written about the subject of speculative astronomy. A Google Books search on that term comes up with the following:

Reflections on the Inconsistency of Speculative Astronomy, Volume 4 (1819)

Volumes 1 through 3 have yet to be found. The text of this work seems to follow the same style of writing, with an unknown author, and ends with "THE END." as The Anti-Newtonian does. This appears to be a Flat Earth book, as it is suggested in several places that the earth is likely a plane. The Author again speaks at length on his investigation into the sun.

While difficult to parse due to a lack of illustrations to accompany explanations in the text, it is believed that this model holds importance because it is an original work based on fresh study of astronomy.