The distance to the celestial bodies is considered to be technically unknown due to confounding phenomena such as Electomagnetic Acceleration and the projection celestial bodies upon the atmolayer which prevents reliable straight line triangulation. However, it is commonly and informally thought that the celestial bodies are in a range of a few thousand miles above the surface of the earth, in line with our precursor organization.

The purpose of this page is to showcase the historic methods that have been used to determine the height of the sun and celestial bodies. More specifically, this page will show that the Round Earth distance to the sun, and therefore the size of the solar system, relies on the idea that the earth is a sphere. The triangulation method depends on an assumption about the shape of the earth.

Distance to the Sun

Q. Why are the celestial bodies and the sun so close to the earth's surface in the Flat Earth Model?

Hence, if we assume that the earth is flat, triangles and trigonometry can demonstrate that the celestial bodies are fairly close to the earth.

“ Eratosthenes' model depends on the assumption that the earth is a globe and that the sun is far away and therefore produces parallel rays of light all over the earth. If the sun is nearby, then shadows will change length even for a flat earth. A flat earth model is sketched below. The vertical stick casts shadows that grow longer as the stick moves to the left, away from the closest point to the sun. (The sun is at height h above the earth. ” 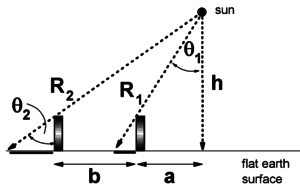 “ A little trigonometry shows that ”

“ Using the values 50 degrees and 60 degrees as measured on the trip, with b=1000 miles, we find that h is approximately 2000 miles. This relatively close sun would have been quite plausible to the ancients.

Continuing the calculation, we find that a is approximately 2400 miles and the two distances R1 and R2 are approximately 3000 and 3900 miles, respectively. ”

There is no other way to get a distance for the sun. Just looking at it from a single point on earth will not tell you its distance, you must look at it from several points and account for the curvature or non-curvature of the distance between those points.

Please note: The writer of that article makes a unrelated side comment about the Flat Earth model --

This has little to do with the distance from the sun via triangulation methods. The writer of the above statement apparently did not read Chapter 10 of Earth Not a Globe. See: Magnification of the Sun at Sunset

Thomas Winship, author of Zetetic Cosmogony, provides a calculation demonstrating that the sun can be computed to be relatively close to the earth's surface if one assumes that the earth is flat and that light travels in straight lines --

Modern Mechanics describes how on a Flat Earth the sun can be computed to 3,000 miles via triangulation, whereas on a globe earth those same angles can calculate the sun to nearly 93 million miles away -- 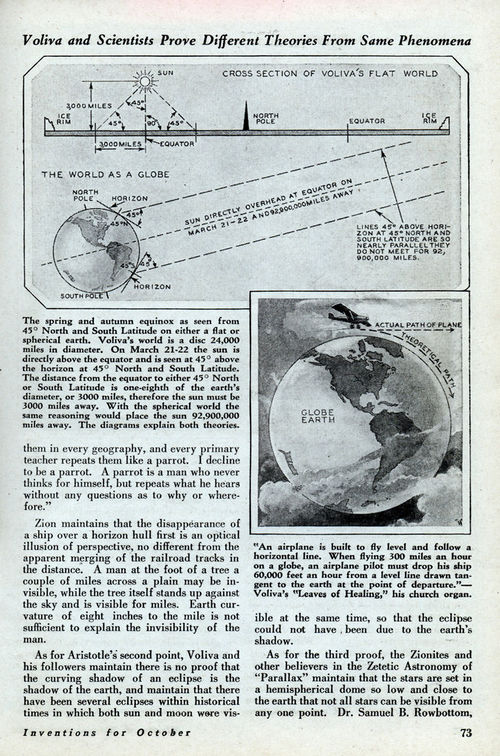