Exoplanets are the supposed planets which exist beyond the solar system. These planets are not visibly seen and cannot be resolved directly, but are discovered through indirect methods, such as slight overall brightness fluctuations of stars as seen over long time analysis through either earth-bound telescopes or alleged space-based telescopes. 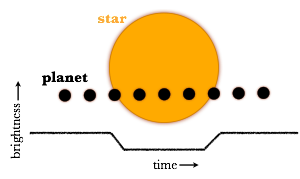 “ Exoplanets are difficult to see directly from Earth. Because they are so small and faint, they are easily lost in the glare of the bright stars they orbit, so we often use indirect methods to find them. One of these is called the "transit method", where we carefully measure the brightness of a star over a long period of time, and look for periodic decreases in the brightness of a star that are caused by a planet passing in front of it. ”

Readers may read through the following articles and decide for themselves on the integrity of this science.

“ These may be the weirdest stars we’ve ever seen. A pair of stars about 360 light years away experienced 28 dips in their light over the course of 87 days, measurements that would normally indicate an orbiting system of planets – except that the timings of the dips seem totally random. Astronomers are completely stumped.

The stars, collectively called HD 139139, were spotted behaving strangely by the Kepler space telescope before it ran out of fuel and ceased observations. Kepler hunted exoplanets by watching for regular decreases in stars’ light caused by a planet passing between the star and the telescope on its orbit. These passes are called transits.

The dips in HD 139139’s light look just like transits, all similar in size and shape, but when Andrew Vanderburg at the University of Texas at Austin and his colleagues took a closer look at the data, they found that their timings seemed totally random – the researchers calculated that no more than four of the dips could be caused by the same orbiting object.

“We’ve been looking at stars with this kind of precision for about ten years now, but this is the first time that we’ve found something that looks like looks like a transiting planet but has no apparent periodicity,” says Hugh Osborn at the Laboratory of Astrophysics of Marseille in France. “Something weird is going on.”

If the transits are caused by planets, the researchers calculated that there would have to be lots of them, far more than any other planetary system we’ve ever seen. “I could construct for you a system of planets that would explain these dips, but it would be really contrived,” says Vanderburg. “It just doesn’t feel right.” And neither do any of the other explanations the team came up with.

Sunspots and internal variations in the star’s light don’t quite work either, because they would have to appear and disappear in a matter of hours. The dark spots that we have seen on our own sun last from days to months, so this would require a new type of sunspot.

With all of the simple explanations ruled out, it’s tempting to consider that the light variations might be caused by a huge alien structure that has been constructed around the stars. We cannot definitively rule that out, but both Osborn and Vanderburg consider it highly unlikely.

“In astronomy we have a long history of not understanding something, thinking it’s aliens, and later finding out it’s something else,” says Vanderburg. “The odds are pretty good that it’s going to be another one of those.” ”

Dust to dust: the mystery of Tabby’s star deepens

“ It’s been dubbed the most mysterious star in the universe, and the latest research does nothing to change that....An otherwise ordinary star about 50% bigger than the sun, its brightness can change by as much as 20%, seemingly at random. ”

Have astronomers found another Tabby’s Star?

"If this phenomenon is the same as what’s happening with Tabby’s star, then we can’t invoke an elaborate explanation for what’s happening in both systems. If you’re starting to see stars similar to this all over the place, then it’s got to be a really common thing that happens in nature. That’s really cool." ”

“ CoRoT-20b is so compact it defies planet-formation theory, study says. ”

“ Two worlds orbiting a "metal-poor" star probably existed when the Universe was less than a billion years old. ”

Astrophyscists puzzle over planet that's too close to its sun (Archive)

“ Scientists have discovered a planet that shouldn’t exist. ”

Nature - The triple sunset that should not exist (Archive)

Impossible Alien World is Impossible. Yet There It Is (Archive)

“ Called SWEEPS-10, the planet belongs to a newfound class of zippy exoplanets called ultra-short-period planets (USPPs) that have orbits of less than a day. ”

“ Most exoplanets are strikingly different from the planets in our own solar system. “We find planets in any order, at any distance, of any size; even planetary classes that don’t exist in the solar system,” Cabrera said. ”

“ Kipping, an assistant professor of astronomy, was contemplating another celestial object anyway, one far more obscure — TrES-2b, the darkest world in the galaxy. “It absorbs 99 percent of its sun’s light,” Kipping says. “That’s less reflective than black paint.” An artistic rendering of TrES-2b, hanging on the wall opposite the window, reveals a disk coal-dark, streaked with scorched red swirls....Kipping was eleven when astronomers found the first exoplanet orbiting a sun-like star — 51 Pegasi b — in 1995. Before that, most scientists regarded exoplanet searches as pseudoscience, like looking for UFOs, crop circles, or Roswell aliens; exoplanet hunters were considered eccentrics. “They were mavericks and radicals,” Kipping says, “and not accepted for the science they were doing.” Still, over the next decade, astronomers would discover a few hundred exoplanets, and in 2009 NASA launched the Kepler space telescope to find more. From seventy-five million miles out in space, Kepler surveyed the stars between the constellations Cygnus and Lyra, and swiftly spotted exoplanets all over the place.

Suddenly a fringe specialty became the most intriguing subject in astronomy. Initially, scientists looked for firsts: the first oxygen-rich exoplanet (Gliese 1132b), the first potential water world (Gliese 1214b), and the first Earth-size planet in the habitable zone (Kepler-186f). In March 2016, the Cool Worlds lab announced the discovery of Kepler-167e, one thousand light years away, the size of Jupiter and about as cold — 220 degrees below zero Fahrenheit. “The exhilaration you feel from an act of discovery is joyous,” says Kipping. “Whether it’s some little thing nobody else knew or an entirely new planetary system, you want to go out in the world and tell everyone. It’s like being in love.”

...Largely nothing is known about the topographical features of exoplanets; Cool Worlds is just now scratching those surfaces. Unquestionably, space theoreticians have long ruminated on exoplanet landscapes. They simply calculate a planet’s density and then take a smart guess. Molten glass rains down on HD 189733b; flurries of rubies and sapphires fall on HAT-P-7b; boiling lava coagulates on Kepler-78b; diamonds cover WASP-12b. None are outlandish claims, but they are all speculations....Astronomers once thought our solar system was a template for the rest of the galaxy. Every inference about exoplanets was built on it. “But our solar system,” says Kipping, “is not typical.” With eight major planets and millions of asteroids, the solar system covers ten trillion miles. Yet compact systems seem more common. The seven TRAPPIST-1 planets, discovered this past February, are crammed in space; they occupy a congested area of barely six million miles — one-sixth the distance between the sun and Mercury, its closest planet.

...The images you see of these alien worlds are imaginative renderings created by multimedia artists in collaboration with NASA astronomers. The depictions are largely speculative, drawing a fine line between scientific precision and artistic inspiration. Typically, the designers have minimal information to go on — the exoplanet’s size, if it’s rocky or gaseous, the distance from the star it orbits, and perhaps a rough idea of its temperature. Scientists work with the artists to rein in creative overreach and ensure as much accuracy as possible. Color choice is critical. Generally, shades of blue or green are eschewed, since blue may be too suggestive of an exoplanet with abundant water, and green can suggest plant life. Rocky worlds with visible surface features are the most difficult to design, and often require several days’ work. Gas giants, blistering balls of fire, usually take less. Either way, these otherworldly illustrations, seen in virtually all media worldwide, continue to captivate millions ”