Firstly, these claims are universally made without demonstration that the calculator is entirely correct in all instances. A source for records of observations, comprehensive or not, is, of course, never given.

Secondly, the assumption that the calculator is based on Heliocentrism is seen to fall flat on reading of the details. The calculations are simple equations that are based on the pattern of previous observations and occurrences. By studying the repeating pattern of behavior of astronomical bodies over a period of time it is possible to create an equation that will predict when the next occurrence will occur or how it will behave in the future.

Under the "Calculation Details" link the NOAA has provided an Excel spreadsheet version of their online calculator here:

Feel free to look at the formula sources in the spreadsheet above and try and find where the Round Earth Theory is expressed or where we see Keplerian orbital mechanics. The calculations are simple equations that are based on the ancient method of assessing the pattern of astronomical occurrences to predict future behavior.

There does appear to be a seemingly Heliocentric element in the worksheet.

AU is short for 'Astronomical Unit', the distance between the sun and the earth in the Heliocentric Round Earth Theory, and Rad is short for 'Radius'.

Put 0 into that column and see what happens. It doesn't affect the predictions at all. Also try 9.5 AUs. No effect. The same results are seen result whether the calculator is operating under the assumption of 0 Astronomical Units or 9.5 Astronomical Units. Looking closer at the equations for this field, the AU field appears to be an output variable, not an input variable. The data of the sun's position in the sky and the simple trending seen in the formulas is not being created from this element. The data is deriving slight adjustments to the default 1.000001018.

Next we zero out the AU field and see that the attributes do not change.

Other elements such as Right Ascension, Declination, Azimuth, and Altitude are merely terms coined by astronomers to describe where things are in the sky.

The online NOAA Solar Calculator and the associated Excel worksheet version are based on equations from a book:

A PDF of the above book is found here.

The following is found in the glossary:

This is interesting. The terminology used in the book suggests to the reader that the book is based on the heliocentric theory. However, as we can even delete the AU column entirely from the previously mentioned NOAA Solar Calculator Excel worksheet, and see that the worksheet still gives the same results for the sun, even when the year and day is changed to a future date after the column is removed, shows us that the element is useless in prediction of the sun's location.

The orbital mechanical calculations of objects with "mass," "orbiting" the sun, and dependent on a "gravitational constant," like described in the above definition and elsewhere in the book is not reflected in the simple equations in the Excel worksheet.

In some areas of the book the author appears to enjoy pretending that he is using Heliocentric Theory for his algorithms, and liberally uses heliocentric terms and factoids to give the impression that Astronomical Algorithms is an a masterpiece of Astronomy prediction. Yet, in truth, when the work is read closely the algorithms are revealed to be just statistical (pattern-based) methods: 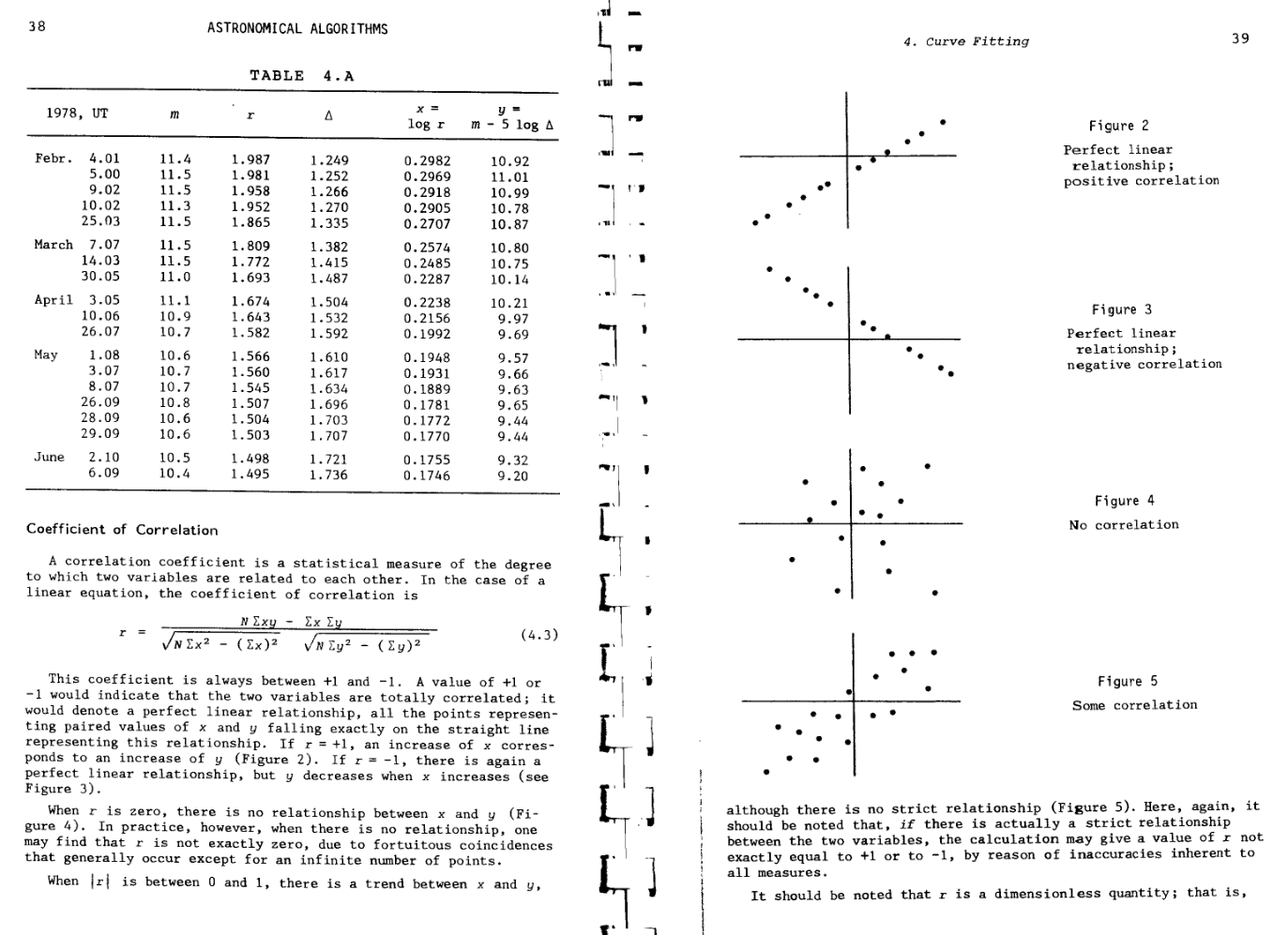 Throughout the work you will see that various problems are worked (patterns created from) geocentrically, rather than starting from the Heliocentric system to make a prediction. The definition for "geocentric" is given on p. 263:

Geocentric: as seen from the center of the Earth

In Flat Earth equivalent for this is, of course, the apparent arc that bodies are seen to make as they pass over the observer.

The problems in the book are not worked out using Orbital Mechanics or anything inherent in a Heliocentric System. The words "heliocentric" are used in various forms in the work, but upon close analysis, heliocentric is meant as the assumed heliocentric attributes the bodies are imagined to have when viewed from the earth. Some of the observations are also used to calculate various properties of the assumed heliocentric model (the AU of Venus as described in the Positions of the Planets section, for example), but this is not the same as using the raw Heliocentric model to predict the positions of bodies. The elements calculated are used as output variables.

Another way heliocentric elements are used is to give the reader background information on how things are supposed to be.

From the Introduction on Page 2 the author admits as much

Several example below highlight this:

Chapter: Rectangular Coordinates of the Sun

From the first page of the chapter on p. 159

As we can see, the coordinates of the sun are computed geocentrically--as in how it appears in the sky from the earth

Again, we see that the method is worked out based on the view of the sun in the sky.

The particular chapter starts off talking about a heliocentric model:

The chapter then switches to a view from the earth:

Note that the author gradually switches into a first-person viewpoint, first by saying that the Sun travels along the celestial equator, which is seen as a line that passes across the sky, and then at a point inserts "the observer"...

The celestial equator is, of course, a line that passes across the sky as seen by the observer.

Chapter: Ephemeris for Physical Observations of the Sun

Definition of heliographic from Marriam-Webster

measured on the sun's disk

Chapter: Position of the Planets

For the position of the planets we are led in with the idea that we are going to see a method for calculating the heliocentric coordinates of the planets:

Notice in the above that the equation that we are calculating B and R, not using it to predict anything.

Continuing on in the chapter:

Chapter: The Calculation of some Planetary Phenomena

The sun positions given by the NOAA Solar Calculator cannot be used to determine the position of the sun in the Heliocentric system.

Video: Calculate the distance to the Sun (Where is the Sun?)

From the description (minor phrasing edits):

The author followed up with a couple of additional videos in 2018: