The Newtonian and Einsteinian theories are often praised for their "astounding" predictive power, yet are unable to explain the motions and movements of the stellar systems of the universe.

Galaxies are observed to spin as if they were solid disks, but according to theory, the center of the galaxy should be spinning much faster than the edges. In order to explain the rotation of galaxies modern astronomers need the entire galaxy filled with some kind of substance which holds the stars strongly together.

“ According to theory, a galaxy should rotate faster at the center than at the edges. This is similar to how an ice-skater rotates: when she extends her arms she moves more slowly, when she either extends her arms above her head or keeps them close to the body she starts to rotate more rapidly. Taking into consideration how gravitation connects the stars in the galaxy the predicted result is that average orbital speed of a star at a specified distance away from the center would decrease inversely with the square root of the radius of the orbit (the dashed line, A, in figure below). However observations show that the galaxy rotates as if it is a solid disk as if stars are much more strongly connected to each other (the solid line, B, in the figure below). ” 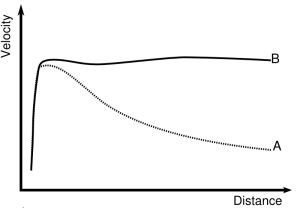 In addition, Galaxies as a whole are observed to spin too fast for their alleged size, beyond the point where, according to theory, the stars should fly away from each other.

“ In the 1930s, Swiss astronomer Fritz Zwicky first observed that some galaxies were spinning so fast that the stars in them should fly away from each other. Unfortunately, Zwicky had personality clashes with many in the astronomy community, so his views weren’t taken very seriously.

In 1962, astronomer Vera Rubin made the same discoveries and had nearly the same outcome. Though Rubin didn’t have the same issues of temperament that Zwicky did, many disregarded her work because she was a woman. Rubin maintained her focus on the problem and, by 1978, had studied 11 spiral galaxies, all of which (including our own Milky Way) were spinning so fast that the laws of physics said they should fly apart. Together with work from others, this was enough to convince the astronomy community that something strange was happening. ”

Distaste of the Scientific Community

From https://www.quantamagazine.org/troubled-times-for-alternatives-to-einsteins-theory-of-gravity-20180430/ (Archive) we read:

“ For decades, astronomers have noticed that the behavior of galaxies and galaxy clusters doesn’t seem to fit the predictions of general relativity. Dark matter is one way to explain that behavior. Likewise, the accelerating expansion of the universe can be thought of as being powered by a dark energy.

All attempts to directly detect dark matter and dark energy have failed, however. That fact “kind of leaves a bad taste in some people’s mouths, almost like the fictional planet Vulcan,” said Leo Stein, a theoretical physicist at the California Institute of Technology. “Maybe we’re going about it all wrong?”

For any alternative theory of gravity to work, it has to not only do away with dark matter and dark energy, but also reproduce the predictions of general relativity in all the standard contexts. “The business of alternative gravity theories is a messy one,” Archibald said. Some would-be replacements for general relativity, like string theory and loop quantum gravity, don’t offer testable predictions. Others “make predictions that are spectacularly wrong, so the theorists have to devise some kind of a screening mechanism to hide the wrong prediction on scales we can actually test,” she said. ”

If one were to spin one hundred different tops composed of different sizes and mass distributions together on a floor it would be expected that those tops would tend to degenerate and spin out of sync with each other. However, the galaxies are seen to move in a synchronized manner, despite being too far away from each other to significantly affect each other by any known physical process, contradicting the concept of a large universe.

Something Very Strange Seems to Be Synchronizing Distant Galaxies

“ Galaxies millions of light years away seem to be connected by an unseen network of massive intergalactic structures, which force them to synchronize in ways that can’t be explained by existing astrophysics, Vice reports. The discoveries could force us to rethink our fundamental understanding of the universe.

“The observed coherence must have some relationship with large-scale structures, because it is impossible that the galaxies separated by six megaparsecs [roughly 20 million light years] directly interact with each other,” Korea Astronomy and Space Science Institute astronomer Hyeop Lee told the site.

There have been many instances of astronomers observing galaxies that seem to be connected and moving in sync with each other. A study by Lee, published in The Astrophysical Journal in October, found that hundreds of galaxies are rotating in exactly the same way, despite being millions of light years apart.

And a separate study, published in the journal Astronomy and Astrophysics in 2014, found supermassive black holes aligning with each other, despite being billions of light years apart.

While current cosmological principles support the alignment and movement of ancient stars at a smaller scale, astronomers are puzzled by the much, much larger patterns across vast distances. ”

One would expect that a distant galaxy should be smaller in apparent size than a closer galaxy, in a linear manner according to the laws of perspective. However, the sizes of the galaxies do not decrease linearly with distance.

Astronomers Guillermo Gonzalez and Jay Wesley Richards write in The Privileged Planet: How Our Place in the Cosmos Is Designed for Discovery, on p.191:

“ Of course Earth’s atmosphere does blur the images of astronomical bodies, but an interesting cosmic coincidence reduces its negative impact on our observations of distant galaxies. The angular sizes of distant galaxies do not just decrease linearly with increasing distance, as nearby objects do. Paradoxically, angular size declines until a redshift of about one and then increases for larger redshifts. The minimum angular size of a Milky Way-like galaxy is just about the same size as the blurring effect of our atmosphere.38 Our atmosphere is not nearly the impediment for viewing the most distant galaxies that one might expect. ”

It is further seen that the physics of the galaxies are based on a discredited theory of epicycles.

“ In popular culture, epicycles have become almost synonymous with bad science; “adding epicycles” refers to a process of introducing fudges to make a theory fit data, when actually the theory needs to be replaced in its entirety. It is generally believed that epicycles were banished from science when Newton solved his equations of motion and showed that it follows from the inverse square law of gravity that planetary orbits are ellipses. So, it comes as something of a surprise to those unfamiliar with galactic dynamics that the galactic orbits of stars are treated in textbooks using a theory of epicycles revitalized by Bertil Lindblad in the 1920s, and used to introduce density wave theory, which, as reinforced by Lin & Shu (1964), by Lin, Yuan and Shu (1969) and by Kalnajs (1973), has been the leading model of spiral structure for nearly 40 years. ”

“ The implication to astrophysics is severe. The motions of stars are governed by known mathematical laws. Astrophysics is, or at least it should be, a mathematical science. One should therefore expect that theories in astrophysics are subjected to rigorous mathematical scrutiny. Regrettably, the degree of scrutiny applied to Lindblad’s epicycles and to density wave theory has been seriously lacking. Students should be made aware that these ideas can no longer be considered as science, and authors of textbooks should consider whether they merit anything more than a historical note. ”