The Sun is a revolving sphere. It has a diameter of 32 miles and is located approximately 3000 miles above the surface of the Earth.

The Sun's area of light is limited to an elliptic area of light upon the earth much like the light of a lighthouse is limited to a finite area around it. The rotating light on a lighthouse does not propagate infinitely into the distance. This means that only certain portions of the Earth are lightened at a time. It also describes how night and day arise on a Flat Earth. Over a large area of land light is limited in its extent due to various possible phenomena. See: Sunrise and Sunset

Rendered picture of the Sun in relation to the Earth

Like the Moon, the Sun is generally believed to be spherical. Evidence in favor of sphericity is the apparent change in the shape of sunspots as they approach the edge of the Sun's visible disk.

“ Spots Apparently Change Their Speed and Form as They Pass Across the Disk — A spot is seen on the eastern limb; day by day it progresses, With a gradually-increasing rapidity, until it reaches the center; it then Slowly loses its rapidity, and f‌inally disappears on the western limb. The diagram illustrates the apparent change which takes place in the form. Suppose at f‌irst the spot is of an oval shape; as it approaches the center it apparently widens and becomes circular. Having passed that point, it becomes more and more oval until it disappears. ” 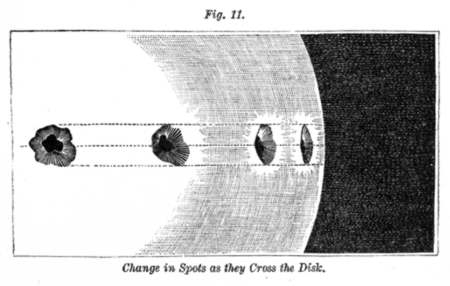 “ This Change in the Spots Proves the Sun’s Rotation on Its Axis — These changes can be accounted for only on the supposition that the sun rotates on its axis: indeed, they are the precise effects which the laws of perspective demand in that case. About twenty-seven days elapse from the appearance of a spot on the eastern limb before it is seen a second time. ”