“ Describing the motion of any planetary system (including purely imaginary ones that exist only on paper) is the subject of a branch of mathematics called celestial mechanics. Its problems are extremely difficult and have eluded the greatest mathematicians in history. ” — Paul Trow, Chaos and the Solar System (Archive)

Mathematician and astronomer Issac Newton is credited to have "brought the laws of physics to the solar system."1 In regards to the multi-body problems of his system, Newton famously invoked divine intervention as his solution:

1The University of California San Diego credits Newton as providing the laws of physics for the Solar System (Archive): 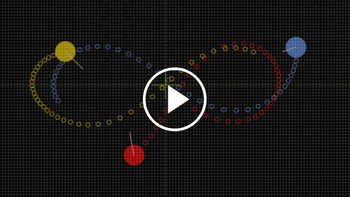 This is precisely the issue of modeling the Heliocentric System, and why its fundamental system cannot exist. Only very specific and very sensitive configurations may exist. The slightest deviation, such as with a system with unequal masses, or the minute influence from a gravitating body external to the system, will cause the entire system to fly apart. The reader is invited to decide for his or her own self whether those scenarios would occur in nature as described by popular theory.

From 'Mathematics Applied to Deterministic Problems in Natural Sciences' we read another account of Poincaré's discoveries:

“ As Poincaré experimented, he was relieved to discover that in most of the situations, the possible orbits varied only slightly from the initial 2-body orbit, and were still stable, but what occurred during further experimentation was a shock. Poincaré discovered that even in some of the smallest approximations some orbits behaved in an erratic unstable manner. His calculations showed that even a minute gravitational pull from a third body might cause a planet to wobble and fly out of orbit all together. ”

“ In Henri Poincaré's study of the collection of possible trajectories for three-body systems he identified sensitive dependence on initial conditions (see above), noted the general complexity of what could happen (particularly in connection with so-called homoclinic tangles), and developed topology to provide a simpler overall description. With appropriate initial conditions one can get various forms of simple behavior. The pictures below show some of the possible repetitive orbits of an idealized planet moving in the plane of a pair of stars that are in a perfect elliptical orbit. ”