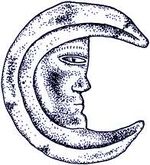 The Moon is likely to be spherical due to a slight rocking back and fourth over its monthly cycle called Lunar Liberation, where more than 50% of the lunar surface can be seen over time.