As response to the Moon Tilt Illusion it is sometimes argued that the illuminated portion of the Moon is misaligned to the Sun since Sun's light is parallel and hitting the Earth-Moon system as a whole from the side, and so the Moon will see a higher Sun than an observer on the Earth. The Sun will appear from a different position in space to the Moon, causing the Moon's illuminated area to point to a position above the Sun that we see from Earth. 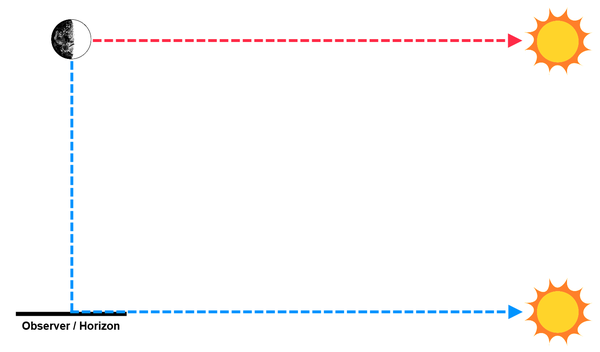 In contrast to this argument, the angles are not perfectly parallel under the Round Earth system. When assessing the parallax displacement between an observer on Earth and an observer on the Moon the Sun will be in essentially the same point in space.

Instead, lets say that you step on a boulder that is 5 foot, 6 inches in height. The new altitude of your eye is 11 feet in height. We know that the green and orange balls are on posts which are 5 ft 6 in below that 11 foot elevation where it would need to be to be parallel to the eye.

We see that as a body moves further from you, it gets closer to your eye level, and displaces fewer degrees in space between two altitudes.

Adopting the above to the Earth and Moon in the RE system, we had from the previous diagram an observer seeing the Sun parallel on the horizontal at eye level, midway setting into the horizon. The Moon was over the observer. In order to calculate the displacement of the Sun in the between observers on Earth and the Moon we may use the angular diameter calculator with the distances involved in miles.

If the observer was able to move from the Earth to the Moon the Sun would be seen from essentially the same position in space. The diagram of the Sun appearing in two different places is misleading, as it does not show the entire scene and the angles are not exactly parallel to the Sun.

Next, we look at a triangle calculator, which will compute the missing values in a triangle: 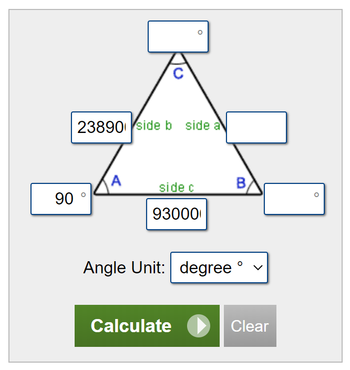 We put in the distances in miles to the RE Moon at Side b, the distance to the RE Sun at Side c, and 90 degrees at the observer at Angle A. This produces the following:

We see a very thin Right Scalene Triangle diagram. We see that the angle displacement of the Sun at Angle B is 0.147 degrees, as previously seen in the angular diameter calculator. We also see that Moon at Angle C is pointing downwards at 89.853 degrees; not exactly parallel to the baseline. 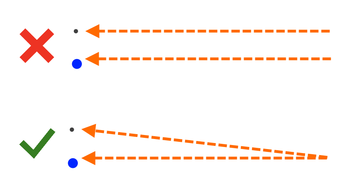 The Sun is not actually shining on the Earth and Moon in a parallel manner, but at slightly different angles.

Now, consider the above thin Right Scalene Triangle diagram which was generated by the Triangle Calculator: If the object at Angle C was a Green Arrow pointing at the center of the Sun (Angle B), and if we could see both the Green Arrow and Sun at once in our field of vision (essentially the whole scene), would the the Green Arrow point at the Sun?

This should be true regardless of the shape of the triangle, and demonstrates the expectation that the illuminated portion of the Moon should point at the center of the Sun when viewed simultaneously. The Green Arrow should not point at a different spot in space.

Finally, it is suggested that since the Sun is so large and the rays are essentially parallel to the relatively small Earth-Moon system at their distant location from the Sun, that the illuminated portion of the Moon is not necessarily pointing at the center of the Sun (restatement of premise).

Hence we see that, with only two bodies, the Moon will always point at the Sun's center, regardless of distance or size. There is no real reason for it to point anywhere else. From the position of the central hotspot upon the Moon's surface it will see the Sun directly 'overhead', and will be illuminated from directly 'overhead', regardless of how the Sun grows or recedes. The addition of an Earth somewhere around the Moon should not matter in regards to where the illuminated portion of the Moon points.